It is lurking there. You will not see or feel it – it will change your mind and nobody will rescue you. Unless – the good guy´s at facebook flag a post some friend made with the helpful words “Partly False Information” and a link to the discussion or the third-party opinions FIRST, BEFORE you are able to read the article.

In this case a friend of mine posted a link to “What if we stopped pretending?” by Jonathan Franzen, published in the New Yorker on September 08, 2019. In this a well known literature figure is stressing his opinion that “The climate apocalypse is coming. To prepare for it, we need to admit that we can’t prevent it.” He is gloomy and does not believe that we can change the course anymore in a substantial way, that we have to be prepared for the worst. Fine, but this is labeled as a “Cultural Comment” not the word of Pope Francis or the truths by North Americas notorious climate change denier and POTUS Donald Trump. We can discuss this, right? We are living in a country of free speech.

Only in April 2020 this article (I stumbled upon last October), I remember, is the first instance for me to see see fact-checking in facebook in action. And it is an interesting example… It present itself in the timeline obscured and as “Checked by independent fact-checkers”. Aha. Really, I first mused – it is happening, facebook becomes a better place!

Not that I do not cherish a lively discussion about science and waddling through the nitty gritty peer-reviewed points to strengthen an argument or perspective, but here an article about climate change in the New Yorker is flagged by facebook as if it perpetrates lies and fake news. I got curious. A new era of truthfulness and scrutiny dawns?

I never stumbled upon a “Partly False Information” flag on facebook so far – and certainly took a substantial amount of my time in the las weeks of lockdown in Italy to debunk the worst myths and misleading arguments in the unfolding Covid-19 crisis, without facebook being a big help at all. Or take the next irresponsible blurp of the President of the United States – do they fact-check that? Is it flagged a partly false information, when he endorses the idea of injecting disinfectants to get rid of SARS-Cov-2? No.

But here, a literature person – Franzen is an author who makes the clear disclaimer that he is no scientist – is being hacked into pieces for a view which some of the commenting scientists just deem “not entirely the scientific consensus of tipping points after 2° warming”. Do we really want to find out? Do we really know for sure? We are talking of things to come, of the future nobody may get right. And it smells that as a result, the article and the concern is the target of this, not the “truth”.

Get me right, I am not an all too big fan of Franzen´s opinion here, nor do I want to endorse every bit of it, but he may have a point in.

Climate apocalypse, by contrast, is messy. It will take the form of increasingly severe crises compounding chaotically until civilization begins to fray. Things will get very bad, but maybe not too soon, and maybe not for everyone. Maybe not for me. […]

According to a recent paper in Nature, the carbon emissions from existing global infrastructure, if operated through its normal lifetime, will exceed our entire emissions “allowance”—the further gigatons of carbon that can be released without crossing the threshold of catastrophe. (This estimate does not include the thousands of new energy and transportation projects already planned or under construction.) To stay within that allowance, a top-down intervention needs to happen not only in every country but throughout every country. Making New York City a green utopia will not avail if Texans keep pumping oil and driving pickup trucks.

The actions taken by these countries must also be the right ones. Vast sums of government money must be spent without wasting it and without lining the wrong pockets.

But as an example of jumping on someone who might not get it all the details in a rant right all the way and who may be a bit opinionated, this feels way out of line. I only buy it if they do the rest of their homework, too. And crack down on racists, anti-intellectual fearmongering, blunt political lies and tampering with the sense of community in fragmenting and segregating people through algorithms.

Who were all these “fact checkers” in the last 30 years when the Climate Crisis was building up, coming in just in time to beat up an author, a concerned citizen of earth? And who are you, facebook, mitigating this and not all the other trash one may post to a micro-targeted audience with enough money spent? Weird. Is this just a way for coercing a narrative? Who watches the pattern of flags for “partial false information”?

Who watches the watchmen – this is specifically interesting in Covid 19 times. Fake news need to get debunked, but also to check who is doing it and also, who spawns these news, who spawns a certain critique…is it legitimate or just a cloaked attempt to beat a good common cause with their own weapons? Confusing times indeed, in which we should stay vigilant and need a lot of people for due diligence and fact checking – sometimes of the fact checking. 😉 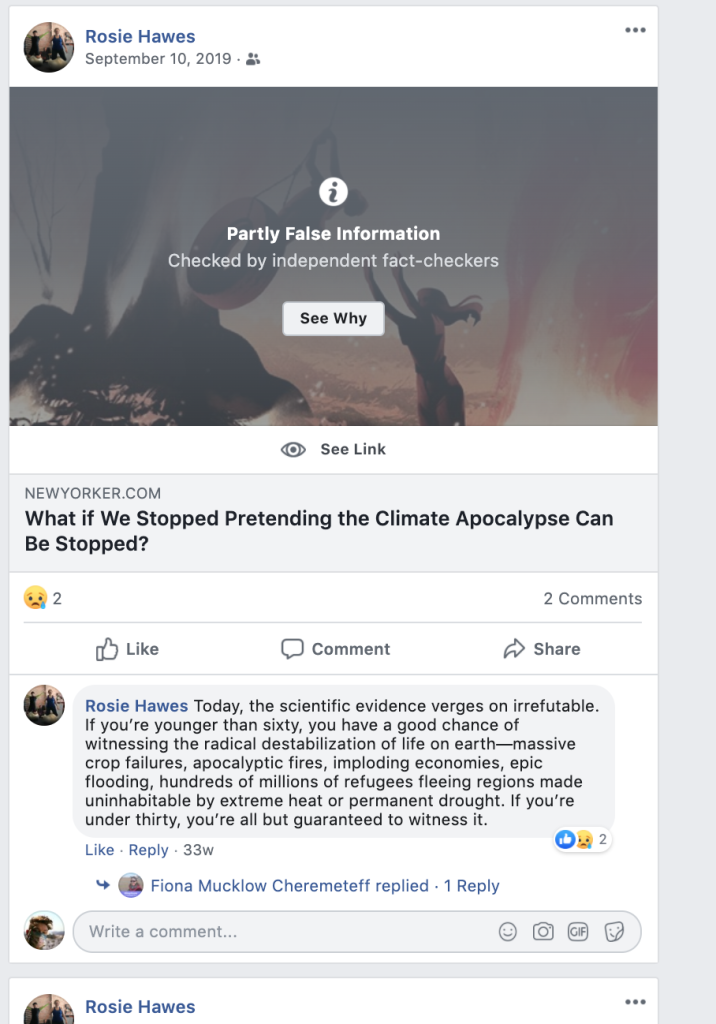