Eating hot stuff can be hell or a bliss, depending on your level of sensitivity and personal comfort – and choice. Who says that fun is always residing in your comfort zone? Choosing to step out of this zone may make you resilient – or coltish. Sensitivity can be trained and eating hot chilis is something you can rehearse…and your mouth might adapt. But for some things you are never prepared. Years ago I chewed down the raw bodies of 12 Thai chilis in front of a camera in a self-experiment with my friend and collaborator Wolfgang Fuchs, a Viennese photographer in an attempt to make a compelling video about our new video production “chili-film” (which sailed on that notion of “sharpness” and being “hot” for 4 years crafting mostly image-films for corporations).

Without buttermilk, oil, bread and yoghurt I would not have survived – I was sure about that in the aftermath.

But the naive experiment I set off years of trying and probing and pushing the boudaries. Since then I became bold in eating more hot stuff than ever. Pushing the limits became sort of fun, specially if you realise how much others might shy away from the unfamiliar “pain”. Years passed by, my palate got stronger (desensitized), but I only rarely really pushed the limits. In a professional sense I was still a novice – but the curiosity stayed. So when new acquaintance Isa mentioned that she would consider herself a pro in eating hot stuff, I was intrigued and when she boldly proposed a duel, it sounded something I always wanted to seriously try out. But I never encountered joyful “morituri” (those who are destined to die in the arena) in eating hot stuff just for the fun of it. So we worked out simple rules and set an evening for the shoot-out.

Isa and me agreed to both buy the most nasty stuff we can get our hands on legally and put all together on a table, adding emergency measures like bread, tons of olive oil, yoghurt and butter milk. No water or beer, that would be an amateurish mistake. Our competition method sounded as follows:

So we gathered an impressive amount of chili soldiers of different kind, habaneros, Turkish yellow ones, red Thai beasts, and as the star in the collection some Trinidad Moruga Scorpion (Capisum chinense), the second strongest chili on earth. On February 13, 2012, New Mexico State University’s Chile Pepper Institute once identified the Trinidad Moruga Scorpion as the hottest chili in the world, with a mean heat of more than 1.2 million Scoville heat units (SHUs), today only topped by the Carolina Reaper with 1.57 million SHU. Scoville is the measurement of the pungency (spicy heat) of chili peppers – as a comparison the jalapeño pepper has a score of 2,500–5,000 SHU. Many people refuse to eat that – specially raw.

So a most unique joust started (we thought).

As an “aperitivo” we gulped down two shots of Sriracha Chili sauce, mostly harmless (~1000-2500 SHU). Then we worked our way up to the yellow nasty Turkish chilis (SHUs unknown) which were the first real “hello” from the fireside. Olive oil and bread in between helped but only two stages later some yoghurt was a common choice to tune down the attack on the taste buds a bit. But all joyful, no sweat or coughing, more a restlessness did set in. How long will that go and will we reach the last stage with the Moruga Scorpion as an endboss? That stuff has the strength level to make Elephants puke (see the video below), that benchmark is high. It took 8 “levels” or steps, the ninth was the Scorpion, on top of the rest so far. 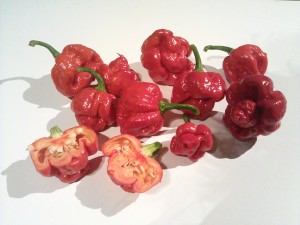 Well, yes. We were both hesitant and a bit weary. In Trinidad, where this comes from, people mix it in paint for their boats, so the wood does not get attacked by parasites. They do not eat this stuff, it is said. Aha. We both had heard stories and the guy selling it said clearly…only take the tip of a knife at once, stay close to the toilet, if you go for more. Well, so we cut of 1/5 of the pointy tip and halved that. Chewing the Moruga is not so much of a challenge, but the smell, the TASTE – it smelled and tasted sweet, like rotten flesh – Zombie fantasies bubbled up, in which you eat THEM, nit vice versa. Rotten dead meat crawling down your throat and rising as an odour through your nostrils. Horrifying. But it was not so bad in “hotness”. So we got bold and halved the beast and cut this in two equal parts. With the first one each of us got about a quarter of it.

Swallowing down this suddenly showed some effect – on me. Like a 30cm stinger in dark mossy greenred it was injecting poisonous swamp-breath and sword-lilies not into my tongue, but my upper throat. Damned, I was not prepared and also not for how my body dealt with the unknown amount of SHU, inexperienced about 1 million+ SHU. It was very weird. In between shivering and being immobilised like an overall bodily reaction, systemic, but not from the point of pain in the throat. it felt, as if I would faint, but I can´t. As if I would need to vomit, but I can´t.

It lasted for sweet half an hour. A fantastic torture to endure, until it faded away slowly I could only observe, more or less still, in microshivers and some moans and shouts of awe here and there. While I had to fight with the rotten Zombie posion, Isa cut the rest in half and ate another piece, smiling. “Ok, I yield!” I stuttered “You win!” in appreciation, because I was clearly finished and she dared another step ahead. The results were the same. Also she got stung badly and had half an hour of suffering and cold sweat came upon her as well until she could move again…almost psychodelic, but not really. 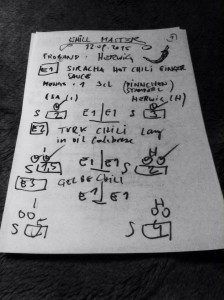 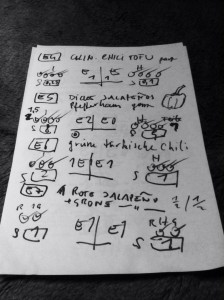 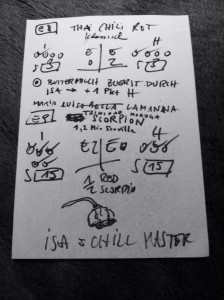 But we had a champion.

I still very glad to have done such a crazy human experiment with a fellow warrior (female or not), otherwise it would probably never happen.

Again: Don´t try this at home.

Even though, post scriptum with true legend Chili Klaus,…we were not so special – if you want to see the reaction from spicy wing´s pro Sean Evans (HOT ONES) after eating an Carolina Reaper, watch this Danish show, which seem to have made a whole TV series out our experiment. Ben, a Danish friend pointed Chili Klaus out to me – who got invited by Evans into his show – as I told him my proud story, feeling suddenly a little less proud. Chili Klaus makes people eat from a choice of the worst stuff out there, one FULL one, and they have to choose which ones they dare to chew. He once also made a full classic orchestra Seems that the Danish and US has acquired a taste about watching people suffering super-hot stuff and made full fledged formats out of it…maybe I should do that, too. 😉