They dance, they get fed, it takes them a while to lift off. The graceful creatures, they swim, but if you wash a black swan do you get a white one? Unlikely. You rather produce dirty laundry.

Running in Berlin autumn, mist allover the place hanging in the air over the slow, tamed river like a damp cloth. All in red, sweating I stopped when I saw a family surrounded by swans, getting fed by them. Women, men, children – with no fear. I know so many locals and international people who are actually afraid of the flock of swans at the Urbanhafen next to the Urban hospital. A joyful peaceful feeding, men and swans almost the same height when they stretched their slender necks to grasp a piece of white bread – or bite another to get a better position in the “hierarchy of the beak” – is unusual.

The kind of people where not German, for sure, but also not the hipster joggers (like me) or the mothers with two blond boys in a wheelcart who looked so protected and frail. The family in question was stout and black-haired with a deep tanned complexion and a mix of clothes one see with people offering cleaning your windows at crossings. Joyful faces, witty eyes, and fearless. A big guy two heads taller than the swans encircling him kept the bread high ripping pieces of and throwing them away so that the beaks will not aim on him. I regretted that I left my camera at home – it was as idyllic as symbolic. More than I knew then, called “the faring folk”, “gypsies” (as some say in a derogative way) – a nomadic colorful bunch of either Roma, Sinti or other origin were not there by chance – they were not alone there. A whole crowd was camping in front of the hospital and under the trees nearby, many families, many mouths eating small snacks.

They were at this moment stirred up by some black swans. A cordon of black officers poured out of the entrance of the Urban clinic and out of a big police van in silver and blue. A second one arrived. The drowsy crowd moved unwillingly and reluctantly, but only small discussions where initiated. I moved closer. While walking through the camp of people who all felt as if they are either celebrating something or aggregated for the sheer joy of warm autumn, took their blankets, plastic bags, children and candles (burning candles?…I wondered) were talking in between them in a language I did not understand. Unobstructed I walked through directly towards the line of policeman – they did not notice me, not asked me, not even gave me a second look. Clearly I was not belonging to the ones they were concerned to control. But why? I look more Northern, Scandinavian than Southern, even if in my heart, it´s vice versa. But who sees that, other than the Petit Prince? 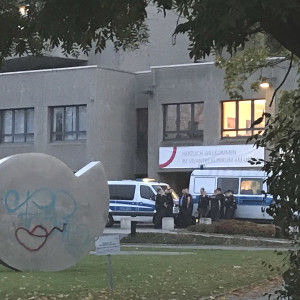 I stepped closer to one of the younger police man in black with a red beard and asked him what all this is about. He looked up and down on me, judging if he needs or wants to answer and told me “it´s about the recent knife attack”. Knife attack – here? He did not want to disclose where and who, but THEY were here for this. I thanked him politely for the information and clarified that I am living in the vicinity, and being curious anyways if there is conflict where I live. So no peaceful afternoon biscuits in the grass feeding the swans. The eyes of the nomadic families were feeding black ones, too, attracting them as if their eyes were biscuits/white breadcrumbs. Maybe they lost someone, maybe there was no vengeance in motion, maybe everyone was carrying a knife – who knows?

In times of security obsession and xenophobia you better unleash preventive action, right? Or, the black swans where protecting the perpetrator in the hospital, who might get a taste of his own aggression by the clan of his victim? I am not even sure if the victim (I read something in the newspaper) was a “gypsy”…

What struck me was that fear was ruling some “swans”, some others were fearless. Was Leda / Lea (see her name in the picture?) coupling a white or black swan? As we imagine, I think, as we deem “appropriate” due to our cultural background and aesthetic choice. Lets open the wings and approach with no prejudice.

I feel more than urged to be alert about human details in our environment, when ignorance and hate is clouding the minds of many. Whatever kind of feather one might find, whatever kind of swan you feeed…not letting fear rule my mind.

And being fed? Timeo Danaos et dona ferentes? Not necessarily,…we have a choice. 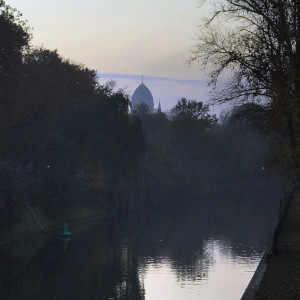