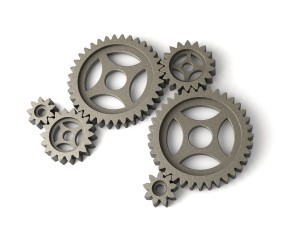 Are we using products or becoming the product? Getting used by our own mechanisms we designed? Human interaction may become more and more machine-like. We get nudged for years now to accept the rule of the machines, fantasise about their rise and our fall in numerous popular stories (Terminator, The Matrix, Battlestar Galactica, Odyssee 2001, A.I, Chappy etc.) – that our creations evolve and we may get discarded by them as a low-performance product of evolution? The parents not being good enough anymore for the children.

But is this happening? Despite dystopian facts as the financial markets depending on algorithms and indulging in flash trade rather than human decisions or the creations of Boston Dynamics which come eerily close to what we once saw only in sci-fi movies. We think we still decide who we want to be and what programs we let perform the task to program our life for us? But then, seen only as a set of data we create and do not own, who keeps humans or machines from dealing with us just on the base of that. Even if we OWN our data, will our interactions be free from the influence of data crunching algorithms and estimates? Probably not. Will we decide where to drive left and right in 10 years, or are we happy to have hands free connecting with our gadgets to our social networks while we are getting driven? Driven by who? Is there a difference between Uber, a professional taxi driver and the driverless google car? Maybe.

Get in my car.

The Austrian hype-band Bilderbuch (Picturebook) is instead revolving around the theme of romance: getting the prospective woman of choice in the car of our middle-class dreams. In their German-language pop-hit wonder of difficult classification the focus is not so much about a digital surveillance dystopia. Last week´s concert at the Faust in Hannover blasted its way through the frenetic, mixed crowd (the video got recorded there and I translated the lyrics to open it up for a non-German speaking audience). The guys barely have one album out and they deliver maybe the best Austrian concert of that kind in decades. But maybe there is no “kind”, as classification is a challenge in their melange of music styles. What is clear is that they left the Alternative Rock roots of their first 7 years behind became more playful, beat driven und wrapped around pauses and soft tunes, festooned with quirky lyrics.

Bilderbuch is more concerned with love and smoking special substances now, something machines only can fake badly so far. Like so often in analogue times love is helped here by an industrial product of prestige, the MASCHIN (Machine) – an individualised vehicle of transport sublimating passion and potency. Heidegger would call it a “Gestell”. Freud the sexual drive. Their powerful pop-song may come across like a hymn for those who aspired to gear a pimped sports car through Hawaii like Magnum (Tom Selleck driving a red Ferrari in the TV series of the same title, for those who are too young to remember this 80ies gem – when being a security expert for a Millionaire had tad more relaxed glam…) rather than a retro-futurist hipster glancing at the option of cyber-implants. But the age range and diversity of people going wild to their sound speaks for itself.

Machines rule – already. And we are becoming a part of them, not the other way around. Artificial intelligence has been said to overrule messy human decision-making for more than 40 years, with no other break through than witty search-algorithms and winning in chess against grand-masters through number crunching. But even this rather simplistic AI is deeply affecting us every day when we use google – even though it does not even closely look like the force we might fear which got unfolded in Transcendence (Wally Pfister, with Johnny Depp, 2014) or Her (Spike Jonze, with Joaquin Phoenix, 2013). These kinds of kindred cybernetic organism might be still far away. The affect of expert software and hardware on our lives is in contrast not. Is that bad? Well, as Douglas Rushkoff emphases in his very popular, critical book “program or be programmed“: We are programming and we are getting already programmed by our own helpers. By an economy who spawned multiple billion dollar empires within less than a decade. The awareness may make the difference, and our agency may depend on our conscious knowledge HOW and WHY we get programmed – to either comply or opt out, if necessary.

“What is the difference between an machine and a slave” one asked proof-reading this article. My answer would be: The slave does know that he is a slave (as a social concept) – the machine does not. The slave is able to get angry about the hierarchy, the machine is only fulfilling goals and cannot think about not fulfilling goals. A machine may have a well designed reward-system, a slave only works because of the oppression – because he/she is forced to – the machine does not feel oppressed, but fulfilled through work.

Some say, humans still excel in intuition and creativity. Maybe true, but for keeping rules and guarding the fulfilment and execution of tasks, computer systems are definitely superior to human attention, concentration and multi-factorial analysis. They do not sleep and keep track of millions of factors if programmed so. But if our systems start to decide for us and set our goals, because we get to lazy to deal with human affairs and reasons, we might loose the war before even getting embattled. The sad truth is that we seem to WANT to get this kind of help – will even pay for the service. In this zone of accepting and wanting the cage and freely deciding not to care if we get programmed or not, one might be able to distinguish humans from machines. If you can´t tell anymore, those humans would fail something we could call an “inverse Turing test” and might be considered on par with…”mechanisms” or automata, but not to be considered human anymore. Yes, the controversy would be if they should then get treated as such, and if they have forsaken their human dignity in society. Someone who is not showing any free will other than choosing from what gets catered may get classified as a machine – it might depend on society to judge if this would be considered favourable or despicable.

Open the door, get in my car.

Romance may be something different, some might calm themselves, even though matching algorithms do boom there, too, and people pay a lot to securely surf partners before they dare to meet them in person. How to take the power over our decisions back from the machines? Lets follow the good advice of two German journalists dealing with the same problem (die Zeit: Schwarzenegger hatte Unrecht, 29/03/2015): Actively choosing to stay more human and finding out what that means. E.g. stop adapting to the artificial demand of becoming more useful every day.

Occupy humanity could mean reclaiming our life back from algorithms.

Paradoxically, one way of resistance would be writing programs who might support us in this task…

1 thought on “Are we becoming Machines?”